Most tourists and visitors to our country will naturally head to Bratislava – the capital of Slovakia. Not only does the city have its own (albeit small) airport, but it’s only an hour drive from a larger Vienna airport, which is a convenient gateway to other European cities and holiday destinations. There’s a very good shuttle bus service between Vienna and Bratislava, in addition to regular trains joining the two cities.

Košice (pronounced as Koshitze), on the other hand, is a little off the beaten path, but that’s exactly what many tourists are looking for when coming to Slovakia. With the population of almost 250 000, Košice is the second largest city in Slovakia, as well as the industrial, commercial and educational centre of its eastern part.

Košice has all the features and amenities of a European city, including an international airport and a modern train station, yet it preserves its unique atmosphere and exudes charm Bratislava doesn’t possess. Mind you, Košice served as the European Capital of Culture in 2013.

Apart from its rich cultural heritage, the city boasts a well-preserved historical centre with such impressive buildings as Gothic St Elisabeth’s Cathedral – the largest church in Slovakia dating back to the 14th century – St Urban’s Tower, the exquisite State Theatre, and a number of beautifully renovated aristocratic palaces skirting the promenade of the Main Street.

When I went to Košice a few weeks ago, I was recommended to try the regional cuisine in the Republic of the East (Republika východu) restaurant at 31 Main Street (Hlavná ulica), just opposite St Elisabeth’s Cathedral. It was a warm day at the end of June, so some diners were taking advantage of the outdoor seating and enjoying the sunshine.

I liked the coolness and the casual look of the interior, nicely furnished with bookshelves on one side. I chose to sit at a table by the window giving onto the street, which let in plenty of soft afternoon light – perfect for taking pictures.

When the menu arrived, I understood this wasn’t just another main street restaurant, but indeed a place with a very regional feel. The menu was written in a strong East-Slovak dialect that broke all the spelling and grammar rules of the standard Slovak language. It did look peculiar to someone coming from outside the region, but with a little bit of imagination I could guess what was behind the names – and the funny comments accompanying them.

I’m not surprised the managers haven’t tried to provide the menu in English, as is now the case in all major Slovak towns, not to mention cosmopolitan Košice. Much of the local folklore and genuine East-Slovak humour would be lost in translation. Fortunately for those unfamiliar with the vernacular, all the entries on the menu are illustrated with great photos, so you have a really good idea what to expect.

It seems that the restaurant caters for all tastes and diets, so alongside traditional Slovak dishes like halushki, letcho or pirohy (both sweet and savoury), you’ll find steaks, prosciutto, duck burgers or braised quail. There’s a good choice of salads, speciality cheeses, homemade desserts and ‘healthy foods’ like quinoa, buckwheat or millet. I was taken aback by an impressive selection of pancakes (both classical and gluten-free), and as I leafed through the beverage list, I realized the place also serves as a cafe, a pub and a wine bar.

I was hungry and wanted to try something I wouldn’t get in a regular restaurant, so after some deliberation I chose Buckwheat Groats with Grilled Vegetables. And I had no regrets when it came about 15 minutes later. 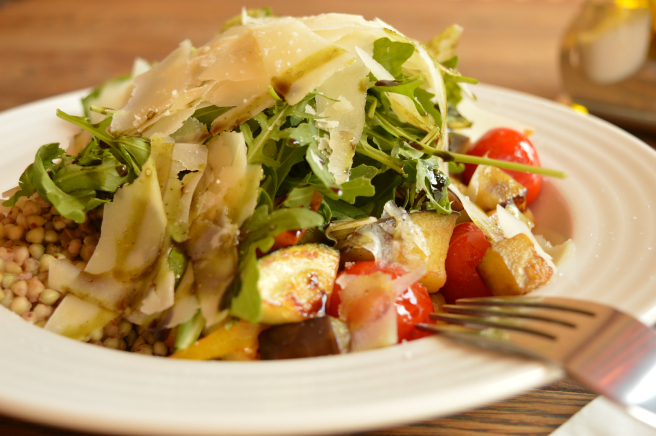 I left nothing on my plate, but was left feeling happier and inspired after the meal. Yes, I’m going to try and recreate it at home. But before I leave Košice, I can’t forget to say hello to the famous singing fountain on the Main Street.

About a 5-minute walk from Republika východu restaurant on the Main Street (Hlavná ulica), there’s a nice and cosy Artforum bookshop, where they sell A Taste of Slovakia cookbook. So if you wander off to Košice on your travels around Slovakia, do call round and have a look inside. I’m sure you’ll love the bookshop’s ambience, and I’d be more than pleased to have your thoughts on the book.

2 thoughts on “What’s cooking in Košice” 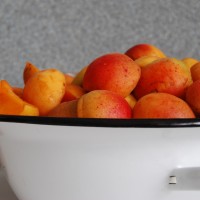