First things first. When I started researching material for the first book about Slovak cuisine in English, the first source I reached for was The First Cookbook in the Slovak Language by Ján Babilon. Despite the obvious contradiction, the reason was, in fact, very simple. I was curious what the first Slovak recipes looked like.

Ján Babilon, a cook and the owner of a Slovak restaurant in Budapest, published his cookbook in 1870. Because of its success, the first edition was followed by two more in 1894 and 1907.

The book contains 1500 recipes, both for the common household and large banquets, as well as practical tips for housewives, such as where to build the kitchen and how to arrange the furniture, what utensils to buy and where to store them, or how to keep everything clean and orderly.

It is a funny read in places, with lots of quaint words that are no longer in use and ingredients I’ve never come across, at least not in the kitchen. Take crayfish, for example, which is now endangered and protected by the law. I remember they used to populate our rivers and streams back in my childhood. Mind you, we girls were terribly afraid of them, unlike boys who would heroically catch the clawed crustaceans and play with them.

When a lady from the USA contacted me last year about typical Slovak spices for a crab boil, I was baffled at first. Never heard, never made anything like that in my life. But then I remembered a recipe for a crayfish soup I’d read in Ján Babilon’s book, and here I have translated it for her and those who want to breathe in the cooking atmosphere of the times long gone.

As there are no photos only a sporadic illustration in Ján Babilon’s cookbook, most recipes contain lengthy instructions with a lot of descriptive detail, so be prepared for a long read.

The crayfish are washed and placed in hot water with salt and a twig of parsley. All is brought to the boil, put aside and allowed to stand for awhile. After that the crayfish are strained. The meat from the tails is taken out and the bitter substance from the backs is removed. The meat that was taken out of the tails is placed in a mortar with 21 deka (210 g) butter and pounded down finely, then everything is placed in a dish above a fireplace and mixed often until it is nicely yellow.

A knob of butter is placed in a pan with a wide bottom and when the butter is hot, the bun with mixed in eggs is spread all around the bottom and the crayfish backs are pushed into the mass. When it is yellow at the bottom, the stuffing is turned and roasted on the other side, then taken out. A tablespoon of flour is added to the crayfish fat and it is roasted together with some chopped parsley, then some beef soup is poured in, salted and left to cook.

Each crayfish tail is cut into quarters and the crayfish backs are separated from the bun: the bun, which was cut off the backs is cut into small cubes and everything is placed together in a big bowl. Two egg yolks are placed in a mug together with a few tablespoons of cream and crayfish fat, with which the prepared soup is thickened and then poured onto the crayfish meat in the bowl.

Looks like housewives of the 19th century spent a lot of time in the kitchen, didn’t they? But imagine what a delicious meal this would make! When/if one day our brooks and streams are clean again and the crayfish return to our waters, wouldn’t you want this ancient dish to be revived in some form?

3 thoughts on “What the first Slovak recipes looked like” 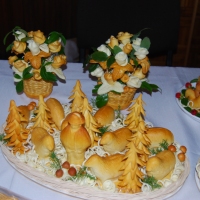